Every summer, over thirty alumni of the Bank Street School for Children return as counselors at the Bank Street Summer Camp. They help facilitate a recreational version of the same education they experienced in the School, and, for many, it’s a chance to peek behind the curtain and see how Bank Street educators educate.

The Bank Street Summer Camp asked Bruke Abraha, Serena Silverberg and Dalas Zeichner, now all in college, what working at the Camp has meant for them since graduating from the School for Children.

Q: What does “the Bank Street way” mean to you? 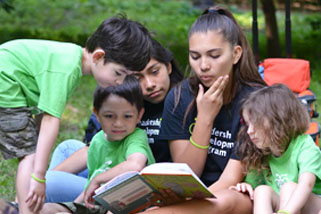 Dalas: The Bank Street experience extends beyond the school and camp. It extends into the home, into personal lives and into their larger community. We want our campers to engage with other people in their own lives, not just those in their camp group or classroom. The desire and motivation to do that is built upon how we encourage kids to grow and expand their learning and their minds.

Bruke: An education is often valued and judged on the results of the student. We are too often fixated on test results and ability to memorize information rather than how the student developed his or her responses. The Bank Street way is about the process. It is about understanding how students and campers alike come to conclusions rather than the conclusions themselves. In doing this, students become more aware of their thought process and strengthen problem solving abilities. At Bank Street we challenge students to immerse themselves into the information, not just study it.

Serena: A large part of the Bank Street approach to education has to do with the child’s experience. Let’s say a kid is drawing. A counselor will never assume that a child is drawing a specific thing. Instead, they ask engaging questions so that students and campers have to think about what they’re doing, like “That’s an interesting color. Why did you choose to use that color?” The child then has an opening to reflect and verbalize the decisions they made when creating their work. So in many ways I think the Bank Street way really begins and ends with the students and campers.

Q: What does recreational education mean to you?

Dalas: Recreational education is focused on the opportunity to learn from your experiences and the people around you. This kind of education is “recreational” because it is not only observed and practiced in a classroom type setting. At Camp, the leaders that campers have around them facilitate campers to learn from one another, from trips and from their experiences. Campers are actively learning by doing, seeing, listening, and experimenting etc., without relying on a purely academic classroom. Each group goes on weekly excursions which reinforce the application of the skills campers learn from our counselors during the camp day.

Serena: At camp, counselors are always observing campers while actively engaging. We discuss every part of the process between what campers are doing throughout their day and how they’re doing it. In the moment, of course, we also recognize behavior we want to reinforce by pulling campers aside and saying, “Oh I noticed that you pushed the chair in for another campers and that was a really nice thing to do.” Time outside of the regular camp hours is spent discussing what we saw and why we think we saw what we did.

Bruke: It’s really about the experiences of the campers. It is about developing social and emotional development as well developing the problem solving skills that Bank Street School does so well. As opposed to traditional education methods where information is given, we challenge campers to observe their surroundings, especially when on trips. For example, last summer a group and I took a trip to the American Natural History Museum. In the Hall of Ocean Life exhibit we challenged the group to find one species that they were surprised to see in that habitat. It was the camper’s curiosity and freedom to observe that drove them to read information about the different creatures and ask guides questions regarding the habitats. Without an enforced syllabus, the campers feel free to explore what interests them most and develop their own ideas. 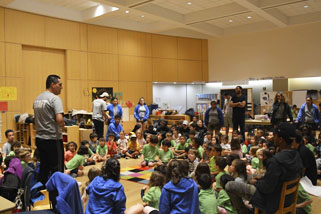 Q: In your experience, what does the day at Bank Street Summer Camp look like?

Bruke: Day to day can look very different based on trip schedules and swim, however in the mornings, we like to have an assortment of small activities that campers can easily engage each other in. After campers arrive we have a morning meeting, where introduce ourselves and get to know the campers through icebreakers or group games. It’s also a time when we can go over the schedule for the day and any safety protocols before leaving the building. After this meeting we generally will go swimming, on a trip or work on different, engaging projects in the classroom.

Dalas: The schedule is organized so campers have opportunities to swim, attend trips and participate in activities lead by our counselors in their focused groups at camp. Eventhough schedules are made before the camp day begins, there is a lot of flexibility for us to adjust when we can. For example, in sports, if campers don’t want to stop a game we are playing, we can often make that happen.

Serena: In the Lower Camp, we’ll usually go swimming around three times a week and then we have trips throughout the week, maybe one or two, but we’re pretty much active all the time. We’re just always going. Some days there are more inside activities but that doesn’t mean we’re sitting around. Campers always have something to do because head counselors are always have a number of things planned that fit within the already packed schedules.

Q: What is swim like at Bank Street Camp? 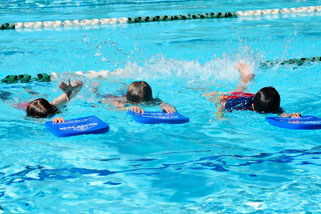 Bruke: Swim at Bank Street is different from any other swim program I have seen in NYC. The camp swim staff take camper’s varied water experience into account and do a great job of assessing campers’ abilities and comfort when they group the skill levels. The aquatics staff also do a great job of keeping up with camper’s progression throughout the summer and will appropriately move campers from group to group as they develop their skills. Since campers also want to play in the water, the swim staff incorporate “directed play,” where campers can practice their skills while playing different water games with friends and swim staff.

Serena: Some campers love the water and feel really comfortable swimming, while other don’t. I think that the aquatics staff does a really good job of helping the less confident swimmers get used to the water and the idea of swimming in general. At times, it can be hard for campers to feel comfortable going swimming, especially when they are without their grownups. For the younger kids, it’s explained to them that swimming at camp may be different than swimming with their family, and that’s okay. It is encouraged that children express how they feel about swimming and being in the water because then counselors and the aquatics staff are able to effectively support them once in the water. Usually, half of the time is structured swim and then the other half is free swim in the kiddie pool. The kiddie pool helps the more timid campers experience the water on their own terms and then work their way up to the larger pool.

Dalas: My group has one of the most varied skill sets in the water. Some of my campers are on swim teams throughout the city. Others have little to no exposure to the water. The aquatics staff works hard to foster a swimming experience that can accommodate both levels of swimming. I’ve seen campers who initially did not want to get into the water their first week at camp, and by the end of the summer, those campers were most excited about swim days. Being excited about something that they were once apprehensive about really grows campers’ confidence. We see it every summer, every day.

For more information about the Bank Street approach to progressive education, see Dean Jed Lippard’s State of the School Address.