By Irene Loewenson, Bank Street School for Children ’14 and The Brearley School ’18 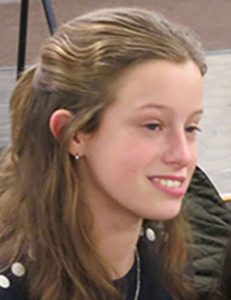 When adults make conversation with a student, they ask the same questions in the same order: “What grade are you in?” “Where do you go to school?” and “What’s your favorite subject?” The first two are easy. But when I respond to the third question with “math,” people raise their eyebrows.

You can almost hear their thoughts. “Oh,” they think. “She’s one of the boring ones, eh?” But that’s not fair. Bank Street has made math fun. One common theme of math through the years is that it is taught through projects where you get some choice in the matter. You can draw a proportional baseball diamond, create a school menu by quadrupling recipes, or make a probability board game. Another common theme of my experience with these projects is that mine were usually about reality television.

Math and reality television are two very different types of interests, you may think. How can they possibly be complementary? [point to 5th-grade math project entitled Runway of Tears] That was my final project for 5th-grade math. I investigated one hard-hitting question: Does the number of episodes a contestant survives on America’s Next Top Model have a relationship to the number of times she cries? I learned about correlation vs. causation, graphing, statistics, and data analysis. And in case you’re curious, the people who lasted the longest were the outliers: the ones who cried the least and the ones who cried the most.

Over the years, this reality television mathematics has become a tradition for me. I learned about scale factor by drawing the Mini Mardashians—no relation to the Kardashians, so you can’t sue me. My spinner for 6th grade’s Casino Day was also Top Model based.

Recently, I did another Kardashian project for school. And my mother suggested to me that, maybe, this would be the last time I did such a thing. After all, she said, in high school, teachers would be less impressed, and I should make the most of this happiness while I still could. She’s right. I know that even without the reality television aspect next year, math will be my favorite subject. It’s enjoyable. It’s satisfying and clear.

I have Bank Street to thank for helping me discover that.